Scott’s very first priority at our new house was to plant a veggie garden.  I think he might have even started tilling before he found his clothes boxes.

We were concerned that such a late planting (first week of August) might mean early frost and no produce.  Fortunately for us, it’s been a warm fall so far.  We’ve been enjoying summer squash for a few weeks, and our lettuce and basil and parsley are going to be munchable in no time.  Best of all, our corn is starting to produce actual corn.  It won’t be ready for a while, but I’m still really excited to see signs of future food.  I think it’s beautiful. 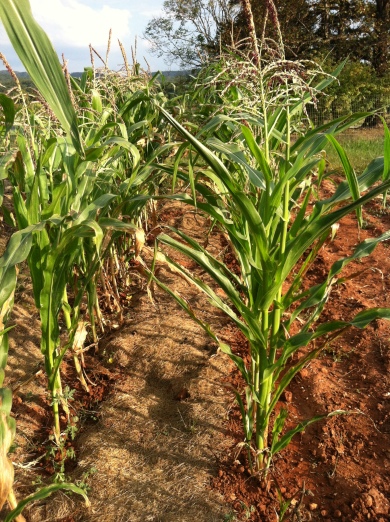 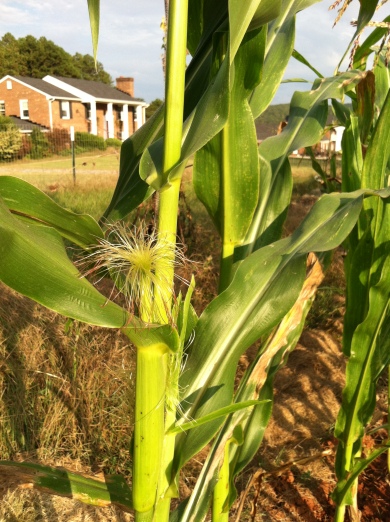 And now for the pizza.  We’ve had a squash and chicken-centric menu this week, and it’s been all kinds of tasty and healthy and good things like that.  We also had pizza one night, because I can only take so much healthy.

Scott has a great recipe for pizza crust that he’s been using for years, and I’ve been gladly using it, too.  It makes a nice crispy thin-crust pizza.

I’ve never tried another crust recipe, and I always feel a little bit weird about that.  You don’t settle on the very first recipe without trying others, right?  Hmm.  So while Scott was laboring away at work, I pulled a recipe switcheroo on Wednesday.  I ran into The Pioneer Woman’s crust recipe while looking for other recipes in her cookbook.  (I forgot which cookbook.)  Turns out, with a bit more yeast than Scott’s recipe, it turns into the perfect combo of crispy thin-crust and slightly puffier, softer crust.  We’ll call it medium crust.  I love it.  I promise that to be fair, I’ll try at least one more recipe before I settle on anything. But for now, this is good:  The Pioneer Woman’s Pizza Crust.

What went on top?  Well, I forgot that we had no passable tomato products that could be used as pizza sauce, so pesto was the answer.  Pesto and slices of fresh tomatoes, turkey pepperoni, kalamata olives, and mozzarella cheese (the pre-grated kind, although the freshly sliced kind would be pretty awesome, too).  Oh, and a pile of fresh spinach that wilted down to nothing and made me feel better about all of that cheese and bread.  I would do it all again.