Today’s decorating projects all revolve around the idea of subtraction.  That mostly involves taking our cabinet doors off of the cabinets and popping the ugly trim off of them.  Someday soon, they’ll transform from 70’s chic to flat-front white cabinets.

The other project has involved getting rid of remnants of ugly around the house.  I struggled with taking down the previous owner’s curtains and blinds and such.  Why?  Well, most of them were homemade.  I’ve made a curtain or two in my day, and I know there’s way more emotion wrapped up in homemade curtains (or homemade anything, really) than the store-bought versions.

Then I had to remind myself that the former owner left these curtains behind, so they obviously weren’t that important to her.  Enter the screwdriver and the curtain extraction project.  Take a look at some of the former gems: 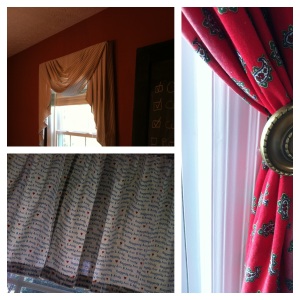 Can you see the print on the bottom left cafe curtains?  It says, “Raggedy Ann & Andy,” followed by a heart.  Oh, man.  And take a closer look at those red curtains: 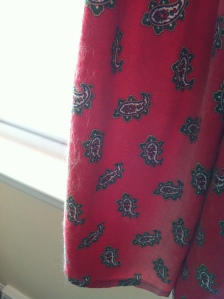 You might not be able to see it, but there’s white cat hair all over that curtain.  Mmm.  I’ll be the first to admit that there’s hair from our dog all over our house.  Our couch was purchased with dog fur in mind, and vacuuming is not my favorite occupation.  It’s different when it’s someone else’s pet hair though.  I have no personal attachment to the creator of that fur fest.  Thus the fur is bordering on gross, not cute.

While I bash the former owner’s curtains, I’ll put in a mini plug for her.  They’re really well sewn curtains.  All straight seams, some of them are even lined and made fancy and such.  They’re just not my taste, that’s all.  I’m saving them to use as drop cloths.  I’ll have the prettiest drop cloths in town.

So I’m grateful for the beauty of less today.  I’m not putting up our curtains until we’ve painted, and there are other steps that have to come before that.  But I can take out the stuff that isn’t ours.  And I am thoroughly enjoying that.