I may or may not have forgotten how many “parts” are in our vacation saga.  Regardless, this is the end of the trip.  Are you ready for an adventure?

If you’ve forgotten, we just left Positano behind with all of its not sleep and late-night hotel searches.  We got on the ferry to Capri with time to spare and gladly made our way to our favorite spot on the island–the Orsa Maggiore in Anacapri.  It’s a splurge, but it was our favorite honeymoon hotel, and it was just as wonderful this time around.

Our favorite spot at the hotel (a.k.a. the pool) looks like this: 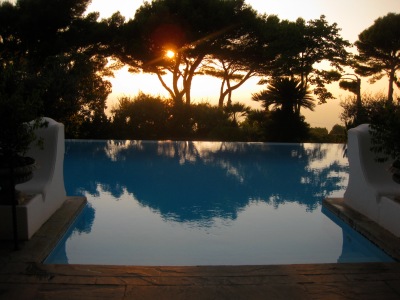 After a night of sleeping in the car and a day of adventuring up and down lots of stairs, the sunset/pool combo was the ticket.  Something about the island is just ten times more relaxing than anywhere else I can think of.  We still had our Capri sunset happy faces on the ferry back to Positano the next day:

This was the plan for the day: first ferry Positano, drive from Positano to Zurich, stay in a cute but inexpensive hotel, go to the airport the next day for a noon-ish flight home.

This is what happened…

Our drive was supposed to take eleven and a half hours, which would put us in Zurich at 11:30 at the latest.  Our hotel check-in ended at midnight.  Still okay.

I’m usually prone to falling asleep while a passenger, which is not what you want your navigator to do.  But not this time.  This time, we created an economy of ants and scratches, and that kept me awake and helpful.

What in the world is an economy of ants and scratches?  Well, Scott loves to receive head scratches and arm scratches and back scratches, and we had about two hundred ants that found their way into our car while it was parked in Positano.  I started smushing ants left and right, then I figured it should be a winning activity for me and for Scott.  So each smushed ant equaled one unit of arm or neck scratches for Scott.  He could redeem his scratches whenever he wanted, but if he left them until the airport, all remaining units came back to me.

So Scott is driving, and I’m killing ants (which got more challenging after dark).  Then we got to the longest tunnel in Switzerland–the Gotthard Road Tunnel.

On the way down, it was open.  On the way back, it was closed for repair, adding an hour or two of steep mountain roads to the drive.  It was also dark and rainy.

Poor Scott.  By the time we got through the pass, we had given up on our Zurich hotel and opted for a quick roadside nap instead.  Then we hit the road one last time.

As we were getting close to the airport exit in Zurich (2 AM-ish), a car pulled in front of us.  There was no one else on the road so that seemed a little bit odd.  Then that car started flashing words at us from the back window.  Kind of like this:

It was an unmarked car, and I believe the phrase was “Bitte folgen polizei.”  Lucky for us, it translated into English after a few rounds of German.  “Please follow police.”  We had a very tired discussion of whether it was a general warning or a specific request, and the car pulled over.  We pulled over just in case it was actually police.

Long pull-over story short, it was the most polite interaction I’ve ever had with police of any nation.  They were just checking on us because it was 2 AM, and no one is really out on the road at that time of night.  They wanted to make sure we were okay.  Nice Swiss polizei.  We made our way back onto the road and to the airport, where we settled in for a 10-hour wait.

Scott is skilled in the craft of sleeping in public, but I’m not so great at that.  I opted instead to read The Fault in Our Stars in one sitting.  That wasn’t my best choice ever.

The book was a freebie at our Capri hotel (yay for the Take One/Leave One book area in the lobby), but I should have known better.  Reading an entire book about teenagers with terminal cancer after a day like that?  Definitely a mistake.  Next time, I’ll go in search of a book about cute puppies who like cuddling next to pretty flowers or something.

Anyway, Scott and I left Switzerland feeling like we had failed at the whole vacation thing.  But you know what?  After a few months, it has gained a glow of adventure and lost the pain of no sleep.  There was definitely more fun than sad.  In retrospect, I declare our trip a total success.