We happen to have an avocado green bathtub, but that’s not what’s going on here.  In the name of eating more greens, I tried a new recipe last night.  I just didn’t know quite how green it would be.  Check it out: 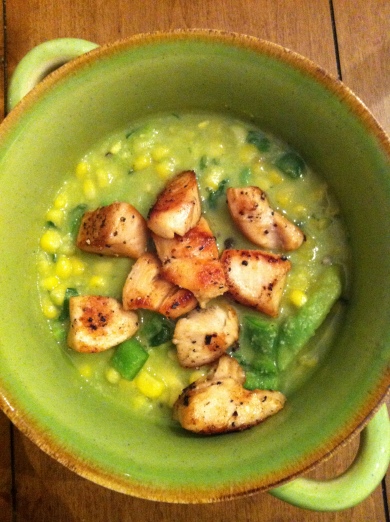 It’s Avocado-Corn Chowder with Grilled Chicken from Cooking Light.  This is how the official version looks:

When we left the grocery store on Sunday, I was concerned because I remembered that we were making this soup, and there wasn’t any broth on our grocery list.  Hmm.  I assumed it was a more cream-based soup because of the chowder title and moved on.  Then I read the recipe.  It’s an avocado/water/orange juice-based soup.  What?  I have never heard of an orange juice soup base.  Needless to say, I started juicing oranges (1.5 total) with fear and trembling.  Sort of.

So orange juice was one potential strike against this recipe.  Who wants sweet soup?  And while I’m on that note, who wants cold soup?  I know that gazpacho is popular and beloved, just not by me.  I love tomato soup, and I love cold salsa on chips.  But mix those concepts together to make something like gazpacho, and I’m out.

That makes two strikes against the recipe in theory.  In practice, it was kind of awesome.  I went ahead and heated the soup base instead of chilling it.  I figured it might help.  I also cooked up a little bit of extra chicken and threw in some extra corn.

The result was unusual and delicious.  The veggies blended together into creamy tastiness, there were plenty of fresh flavors in the mix (with just a tiny hint of orange juice flavor), and the salt-n-peppa’ seasoned chicken was a simple savory addition.  Om nom nom.  Oh, and the hint of red pepper in the soup gave it a teeny hint of hot.  You should try it next time you’re craving a shot of green.  Just what the doctor ordered.