I’ve had the flu before.  I think it was something like a day and a half of 99 degree fever, mild discomfort, and well again.  Ta da!

Not this time.  I woke up on Monday with normal flu symptoms, and I decided it would be best to call in sick so I didn’t get my co-workers sick, too.  A few hours later, things got a lot worse.  Then things stayed worse.  I discovered a new kind of body aches, that I can in fact nap for 8 hours a day, and that I’m not opposed to taking medicine if I feel bad enough.  Honestly, I had no idea I could sustain that level of napping for more than two days.  I could have been training for the Olympic napping team, and I’m pretty sure I would be in the running for a medal once I got to Sochi, for that matter.

It would have been awesome if it weren’t for the really bad discomfort/pain/can’t-control-my-body-temperature thing.  Anyway, there was a doctor visit, then a prescription (did you know they prescribe something for the flu these days?) and some lovely medicine side-effects.  Yuck.

In all of that glory, where was the good?  Well, I have a boss who encouraged me to stay home long enough not to infect the whole library.  I really appreciate that, when I’m sure it would be easy to want the whole team back in action instead.

I also have a husband who is nice enough to make his own dinner when I’m comatose on the couch.  It’s surprising how much energy it takes to say “hello” when you’re sick, much less make dinner.  I have an all new appreciation for parents who have to be sick while also parenting.  Whew.

Last but not least, I have a Peanut whose lump-like nature is inversely related to my physical distress.  He’s normally really difficult to move if he’s asleep–like mother, like dog.  But on Monday and Tuesday when I thought I might just be one of those rare “just the normal flu” fatalities, if I twitched, Peanut moved very obligingly with me.  He slept next to me for every hour of naps, and he watched as I wobbled to the sink to get water.

Then on Wednesday, when I started to feel moderately like a human being again (lower fever!!), Peanut got a tad bit stubborn.  When I slept on the couch with him and tried to move, he would not budge.  That little lump was there to stay.  No more Obliging Peanut for me.

Today, now that the symptoms are down to all of those fun recovery symptoms (cough, sore throat, frog voice, head that feels like it might explode because of pressure), Peanut is his own man.  He’s napping on the other side of the couch, getting up to investigate sounds.  Giving me the stink eye if I wake him up. 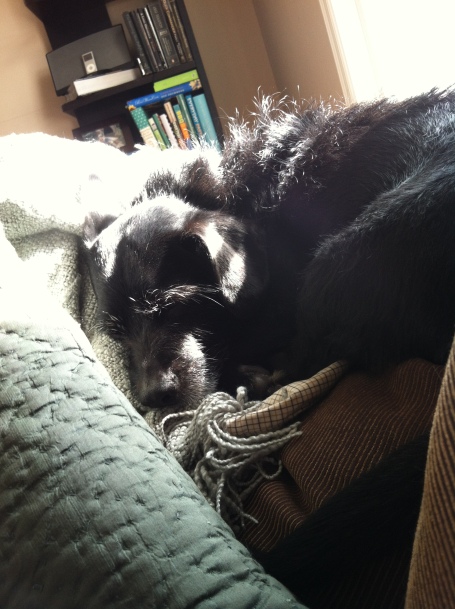 It’s good to feel alive again, and it’s good to have my stubborn lump of a dog back.  And yes, that picture is of Peanut napping to recover from all of those intense naps.  I might have taken a post-fever recovery nap or two, too.  Like I said, Peanut and I have some things in common.  We’ll be back in action tomorrow.