It’s still deer hunting season, but even when it isn’t, we have a buck year-round.  And because we’re so incredibly creative, his name is Buck.  (I actually didn’t name him, and I actually do like his name.  A little bit of obvious naming never hurt anyone.)  He was Scott’s first buck, and I happen to think he’s kind of nice looking. 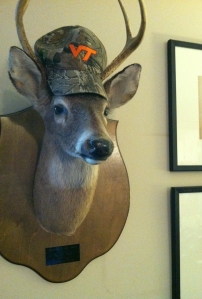 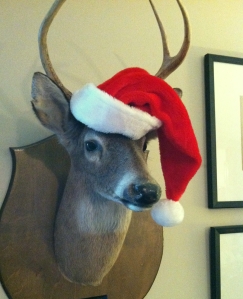 There’s a cheery Buck for Christmas (coming to a wall near me sometime in the next 24 hours). 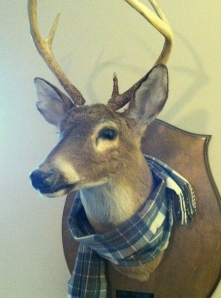 And there’s my personal favorite, a Buck for late winter.  I think his scarf is pretty dapper.
So what’s my main point here?  Even when you don’t expect to someday have a deer on your wall, you might just find yourself liking it.  A lot.
P.S. I would hate to make Scott’s manly taxidermy look girly. For over six months a year, Buck is unadorned and 100% manly.