This weekend was chock full of adventures and productivity and naps.  It was great.  And this morning, thanks to the time change, we got to watch the sun streaming over our friendly neighborhood hilltops, not the dramatic pink sunrise that we’ve grown used to.  Both options are good. 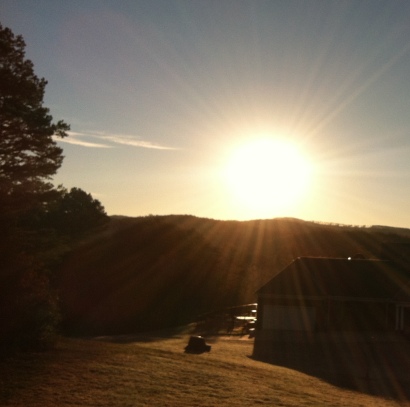 We also got the bonus of frost crystals on the back deck.  Fuzzy banister! 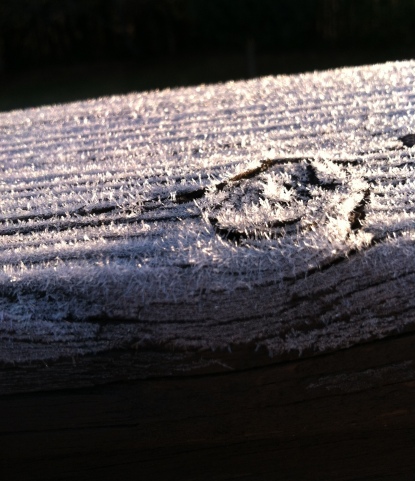 Do you know what fuzzy, frosty banisters call for?  More spice, of course.  We had some chili on Friday night that was a switcheroo from the standard turkey chili.  I suspect that it’s first cousins with Cincinnati chili.  The recipe is Giada’s California Turkey Chili.  It has some spices that a lot of chili recipes don’t use, which gave it a really rich flavor.  Between the heat and the brown sugar/cinnamon/etc., it was pretty tasty.  I would show you a picture, but it turns out that even for professional photographers, turkey chili just doesn’t look that pretty.  I’ll let you imagine what it looks like.

The only real changes that I made to the recipe were changes of convenience.  We have a bounty of smoked serrano peppers, so I used three of those (they lose some spice when smoked) and one poblano pepper instead of the two poblano peppers that were called for.  I wouldn’t say my substitutions were a mistake.  The smoked peppers definitely added delicious flavor.  They might have added more spice than the recipe intended, however, and it was at the top of my spice-acceptance meter, for sure.  Scott loved it.

So… try the recipe as it’s written or throw in whatever peppers you’re brave enough to try.  Also, the recipe says it takes 2 hours and 30 minutes to make.  I read through it to make sure that wouldn’t be true, and it isn’t.  Thank goodness.  I think it took me 40 minutes or so, and I’m a slow cooking type of gal.