Today’s happy moment is brought to you by music.  For the past year and a half, my musical contribution to the world has been limited to radio sing-alongs and an occasional shower concert.  Talk about great acoustics!  All of that water drowns out any less-than-perfect notes.  (Technically speaking, that isn’t great acoustics, however.)

Before I moved here, I did actually contribute musically in other ways.  Sometimes I forget that throughout college, two of my weeknights were taken up with choir practice.  Between those practices and an extra ensemble one semester, singing took up a big chunk of otherwise free time.  Don’t even remind me about Saturday morning practices during finals.  Ugh.  Then in grad school, Wednesday nights were devoted to church choir practice, and a few other miscellaneous singing groups were sprinkled through other years.

So I was talking to the director of music at my church this morning, and I mentioned that I would really like to be a part of the Christmas choir.  I almost forgot to mention that in the larger context of our conversation, but then it came out.  Lo and behold, I was all signed up for singing schtuff a few minutes later (bet he’s hoping I’m not tone-deaf!). 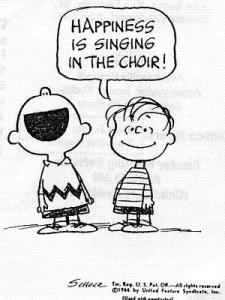 I didn’t mean to sign up for anything other than a few months, but on my way to work after that conversation, I was so freakin’ excited.  I had no idea how much I missed singing in an official capacity.  I got involved in other things when I moved here, and that was fine.

It’s great to find one of those things you used to love and realize that it’s still important to you.  Someday closer to the holidays, I’ll tell you about my university’s Christmas Vespers service.  Even though it wasn’t a terribly rich service on the spiritual front (trying to cater to all major religions can do that), singing in it is definitely near the top of my favorite life experiences list.  It was one of the most beautiful things I’ve ever been a part of.  [Sigh]

Oh, and here’s a tip… if I mess up, a giant smile involuntarily covers my face.  If I look semi-serious, I’m probably singing well.