As you may recall, yesterday was the Day of the List.  It turned into a list of 17 items, not 11, and I’ll ruin the surprise ending now.  I finished 11 out of 17 items (should have stuck with the original list, right?), and this grand saga is all about item number one.

The first thing on the list was a trip to the VW dealership for my car’s 30,000 mile check-up (and he, the car, will henceforth be referred to as Gus).  Gus needed some extra engine coolant and an oil change, and I thought I would have them do the state inspection while they were at it.  The charge was the same at the dealership as any old gas station, so it seemed like an efficient choice.

In my mind, this was a well-check-up.  The mechanics would switch out some of Gus’ fluids, they would take his temperature, and we would leave with a lollipop or a sticker or something.  I waited patiently while Good Morning America came and went, then Regis and Kelly did their thing, Rachael Ray cooked and chatted for an hour, and finally came The View.  I’ll admit that I kind of like Kelly Ripa and Rachael Ray, so I was pretty content until we got to The View.  A bunch of women who talk over each other yet actually say next to nothing doesn’t qualify as fun TV in my book, so The View is where I draw the line.

Twenty minutes into that show, the dealership representative gave me a status update.  She told me quite proudly that Gus failed the state inspection and proceeded to give me some options to resolve that.  She even told me in a somewhat smug voice that they’re quite strict with their state inspections.

She said that like it was something I should be happy about.  In retrospect, why in the world would she think that would make me happy?  It’s not like Gus went to an Ivy League college or something.  If he passes the dealership inspection, he won’t get a special sticker with magna cum laude on it, and opportunities won’t start opening up for him because he passed a tricky inspection.  He’ll just get in line to be inspected again in twelve months.  And since my car failed their strict inspection, she was basically telling me that if I had gone somewhere else, I could have saved myself a bunch of hassle.

I was also informed that Gus failed on two counts: back tires and a connection between something or other in the front bumper and the rest of the electrical system.  The tires make sense.  I can handle that.  Give me a few days, and I’m all over it.  The connection is what doesn’t make sense.

A year ago, Gus went to the exact same service center, where they told me that the cable in question only impacted the temperature gauge, and if I didn’t care what temperature the air was on any given day, I had no reason to fix that.  So I didn’t get it fixed.  Gus tells me that it’s “—” degrees every day, and I tell him that he will be a fine meteorologist when he grows up, just like any good mother who wants to encourage her slightly challenged child.

Then yesterday the dealership told me that the same cable connection was absolutely essential and that it also connects to my front turn indicators.  They wouldn’t dream of passing Gus through inspection unless I get it fixed.  So they ordered the part without even asking me, at which point I told them I wanted to finish this lovely process another day when I had a chance to research tires and options.  I paid, sat down in Gus, and promptly burst into tears.

I couldn’t decide if I was crying out of surprise that Gus needed repairs or anger at the dealership.  I never know what to do with anger, so it usually comes out in tears.  My mom’s theory was that I needed a nap and some food.  Moms are good at taking care of you like that, even long-distance.  Anyway, there I was crying.  I had just spent my entire morning in a waiting room when I had exactly sixteen other things to do, and now I faced the same thing the next weekend.  Sad.  Tear-inducing, in fact.

With almost 24 hours of distance from the situation, I know it isn’t a big deal.  But let me tell you, it was a doozy of a start to the day.

This is the inspection failure sticker that the dealership pasted on Gus’ windshield for all the world to see: 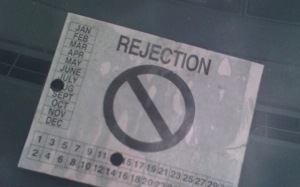