I could currently recreate the scene in Bridget Jones’ Diary where she’s scraping mold off a block of cheese and the camera pans back to an empty fridge.  In my case, I would also be able to drink some old chicken broth with the moldy cheese.  I lead a very gourmet daily existence.

Instead of being sad about the lack of groceries, I’m thrilled at the contents of the fridge door.  Here’s the main part of the refrigerator: 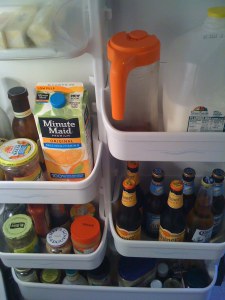 When I moved into my first apartment after college, I had some mustard, butter and salad dressing in the fridge door.  Really, those are the essentials.  Four years later, the door is full of tasty things that make food (and therefore life) way more exciting.

As Martha would say, it’s a good thing.

There are spices and marinades and all sorts of things that add flavor to your everyday staples–all in my kitchen.  Best of all, I’ve got a general idea how to use them.  Although if I’m being totally honest, the apple cinnamon marinade still throws me off.  Maybe it’s meant for pork chops?

Regardless of how the apple cinnamon marinade gets used, it’s comforting to think that with a piece of chicken and something or other from the recesses of the pantry, I could create a tasty meal.  I feel like I should get some sort of wilderness badge for taming the kitchen.  I might not be a master chef at this point, but it’s been over two years since the fire department has been contacted as a result of my cooking.  Major culinary steps have been made, and you can see it in the fridge door.