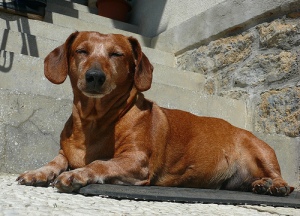 Imagine that this dog is a human and that it’s in a VW Rabbit with the windows rolled down.  It’s still basking in the sun with that exact expression.  It’s still in heaven.  That was me at lunch today.  There aren’t many things that top the feeling of sun on your skin at the beginning of spring.  And dogs have this soaking-in-happiness look down so much better than humans.  I guess they have more time to practice while we’re at work.

While we’re on the subject of cute dogs, I’ll put in a plug for mine.  I’ve mentioned this to lots of friends, but it’s worth repeating.  Have you ever smelled a dog’s paws?  It sounds weird, since I see where my dog’s paws go on a regular basis.  He isn’t going to win any prizes for cleanest dog on the block.  And somehow, despite all of the gross places that his paws land, they smell absolutely wonderful.  Granted, it’s still a doggy smell.  If you can’t stand pets, this probably isn’t the moment that will bring you around.  If you do like pets, this might make your day.

I did get a little carried away with testing this once and smelled the paws right after we took a walk in the rain, and I will advise against that.  They still smelled like plain old wet dog.  But in general, you should try it.  You can borrow my dog’s paws if you don’t have your own.  He’s not one to turn down a belly rub.