Sometimes I have less time or inclination to pick amazing new recipes.  Because you know, I’m human.  On weeks like that, I think through recipes I’ve made before and cobble something together.  Not every week requires formal dining.  Every week requires dinner that makes the day better.

I love this soup.  I don’t usually pick recipes that include taco seasoning or ranch dip seasoning (because sodium), but this one is so tasty.  It’s easy to make, it makes great leftovers for the rest of the week, and what more could I ask for in a recipe?  It’s even pretty healthy. 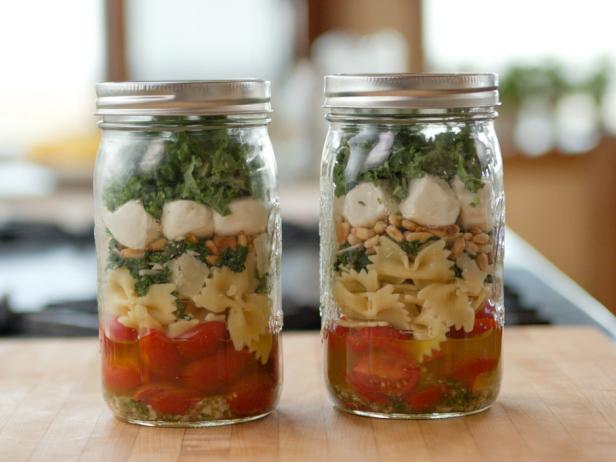 This was a new recipe to me, but the source is an old standby.  The Pioneer Woman has been so good to me.  I’ve made dozens of her recipes, and only one was a flop.  That’s such a wonderful success rate!  Thank you, Pioneer Woman!!!  This one was super tasty, but next time I would A) use 2 bunches of kale (it cooked down to too small a quantity in relation to the other ingredients, in my opinion), and B) use slightly less dressing per mason jar.  I made this into 5 servings, and even at 1/5 of a cup of dressing each, it was too “dressed.”  Maybe 1/8 of a cup per serving???  The Pioneer Woman makes things practically perfect in every way, but sometimes you just have to adjust things to your own taste.

We have quite the little Daniel Tiger fan club at our house, and Daniel Tiger makes rainbow pizza in one episode.  So rainbow pizza came to our house this week.  We used fresh chopped spinach, yellow and orange bell peppers, and tomatoes to make our incomplete rainbow (couldn’t find any purple veggies I thought I could entice said toddler to eat).  Since he’s just delving into the world of eating real foods that aren’t separated out on the plate, even pizza is a hard sell at our house.  He was really excited about making the crust and assembling the pizza with me.  He was really excited that we had rainbow pizza in the house.  He ate a few bites.  Win?  I can’t decide, but it did taste good.

Like I said, The Pioneer Woman has been good to me.  I’ve made this twice now.  It’s easy and tasty, so major goals are accomplished.  It is, however, slightly better the first night instead of as leftovers.  I guess that’s okay sometimes (or if you have enough folks to eat it up the first night, it would be scrumptious).

I’ll get the embarrassing thing out of the way.  I quadrupled this recipe.  (Yeesh, we eat a lot.)  But it was worth it–tasty, healthy, easy, and satisfying.  Oh, and I added some chicken (baked thighs in the oven like this, chopped them up later and added them to the fried rice enough to warm it up before serving).  I made the chicken without the sauce mentioned in the recipe, and I added more soy sauce than the fried rice recipe recommends.  Perfect Friday night dinner.

Joanna Gaines has also been good to me.  Her biscuits are my all-time favorite biscuit recipe (it’s in the Magnolia Journal magazine).  It took me six years of biscuit attempts to come to that conclusion, but I think it’s going to stay at the top for a long time.  I made a double batch of this banana bread, and it was delicious.  I might add in pecans or walnuts next time (they’re in the picture but not the recipe… hmm), but that’s a pretty minor adjustment for the future.

The good news about this week?  The recipes are tested, easy, and comforting.  And I got inspired yesterday, so the upcoming week’s menu is a bit more fancy schmancy.