Our next stop after a few days in Lugano was the Cinque Terre–Riomaggiore specifically.  Never heard of it?  Well, the Cinque Terre is a national park area in Italy that surrounds some villages along the coast.  I used to think that a couple of the villages were only accessible by foot.  After hiking there and seeing tour groups, I doubt that information a bit.  Maybe the tour groups arrived by boat.  Maybe they arrived by hovercraft.  Anyway, the villages are tucked along the cliff, and they’re beautiful.

We started with a good sunset and some food.   It’s a pretty ideal way to get acquainted with any new town, in my opinion. 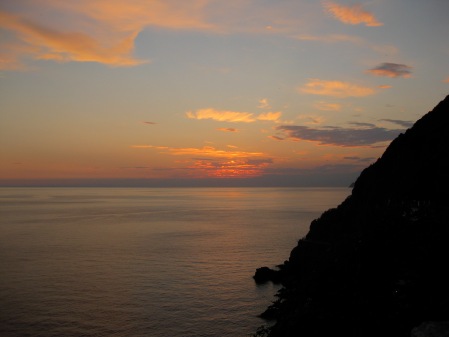 We continued the next morning with my favorite hike of the trip.  It didn’t quite stretch between all five villages.  We started at the southernmost village, Riomaggiore. 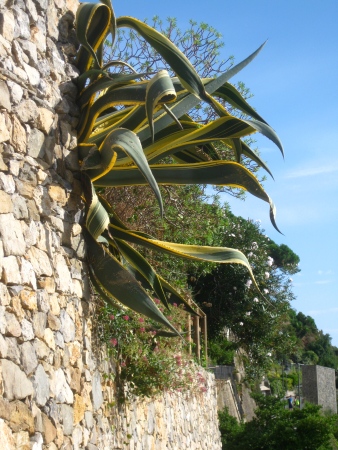 I spent a lot of time guesstimating how long it would take for plants to get that awesome at our house.  I think the answer for the things-growing-out-of-rocks plants is never.  Boo for different climates. 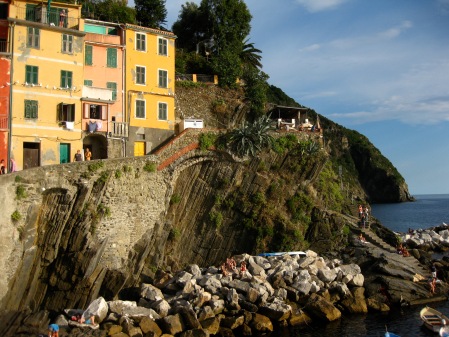 The main trail along the edge of the coast was closed between the first two villages, so we hiked up and over the mountains instead of around the edge of the mountains.  It was actually pretty satisfying.  I believe this church was in Manarola, but honestly, the cute little villages all melded to one or two overall impressions in my brain by the end of the day.  They’re all nice. 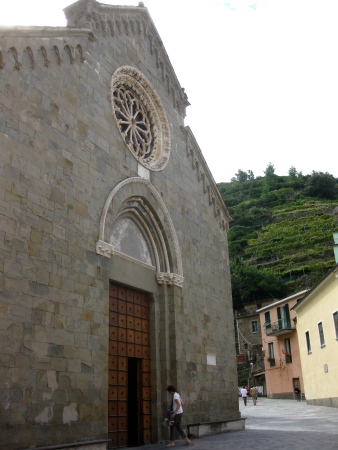 So is this cat.  Creative use of mostly empty plant holders, right? 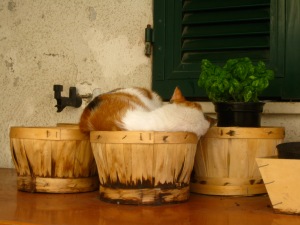 And of course there were olives next to the path.  Lots of agricultural areas outside of the towns, actually.  I decided that if Scott was out farming our plot of land, he would get a different number of visits/cold tea deliveries depending on how long the hike was from home.  Some of those plots of land were at least an hour hike from the nearest semblance of civilization.  Whew.  (If you’re wondering, the breakdown was as follows: daily visits/tea if the hike was less than 20 minutes one way, two-three visits a week if the hike was between 20 minutes and 45 minutes, once a week tops if the hike is over 45 minutes one way.  Because I’m mean and indoorsy.) 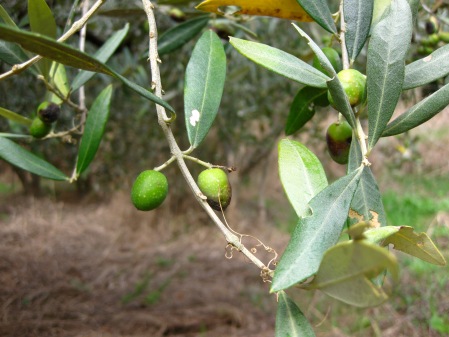 This garden kicked our garden’s butt this summer.  So many tomatoes! 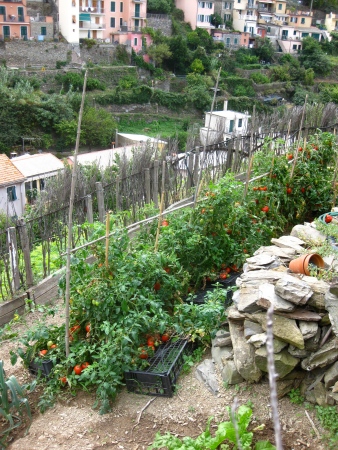 Oooh, and this is the house we picked for ourselves.  Or the yard that goes with the house.  It had another large chunk of yard on the other side of the hiking trail, and it had great garden land all around the house.  And if memory serves, it was relatively close to town.  Whew.  Frequent tea delivery for Scott.  We like to get really involved in vacation. 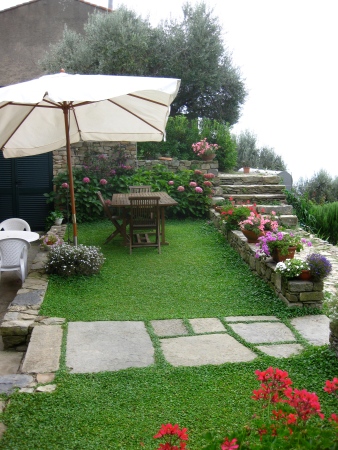 We also like to look at crystal clear water.  Scott likes to dangle dangerously over said water.  I do not.  Thus only one pair of feet. 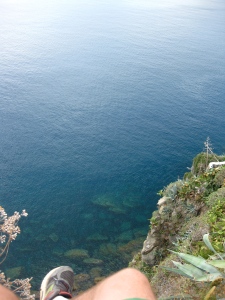 This lady understands my foot-dangling fears. 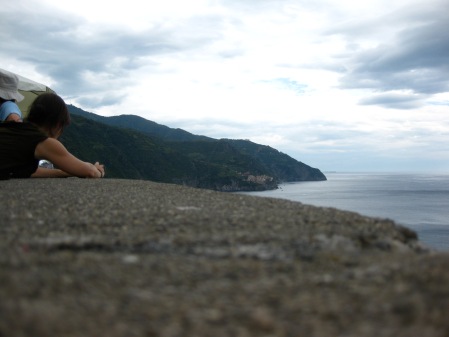 So I believe we’re three villages into our journey at this point.  The cliff-side trails were still closed to this village, so we’ve hiked and stumbled down mountain stairs and hiked some more.  It was fun, but my knees are getting old.  To console our not quite happy knees (or mine), we had the world’s best trail beverages–lemon granita and some super cold sangria.  I have never once considered drinking sangria on the trail, but it was pretty fantastic.  Don’t tell the real hikers.  I’m fairly certain granita and sangria are not athlete-approved sources of refreshment mid-hike. 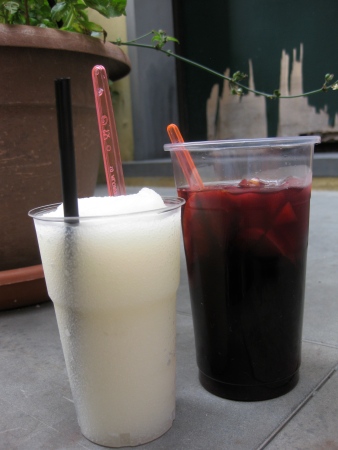 The cold beverages did get us safely to our last stop, Vernazza.  True, we missed the fifth of the five villages.  I didn’t mind. 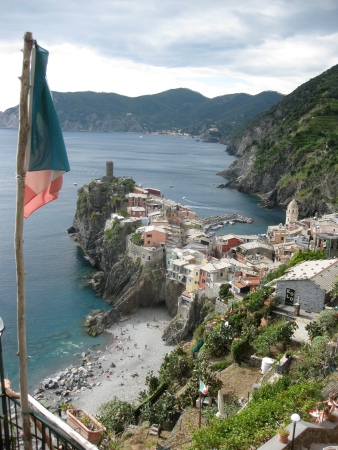 Instead of hiking to that last village, I sat by the water for an hour.  There was a constant stream of running kids behind me on the beach, and by the end of the hour, they had plucked every bit of living plant matter from the pier and placed it on their sandcastle.  I was pretty impressed. 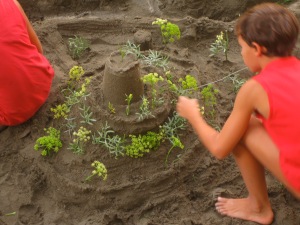 And I dangled my feet some more. 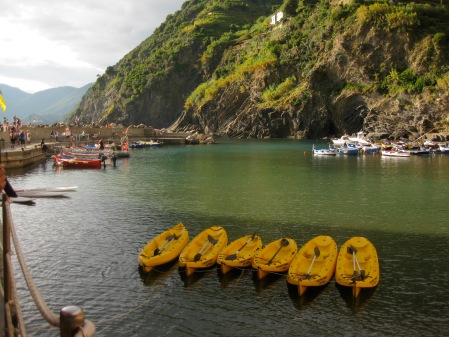 Scott decided to be athletic instead, so he kayaked around a bit. 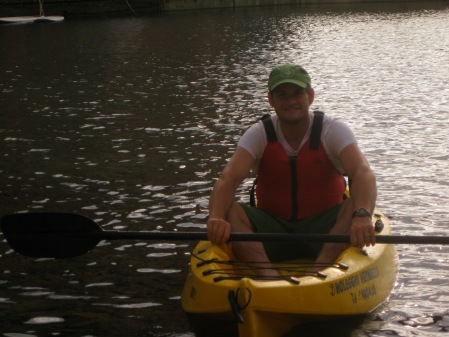 When we were both finished with our water adventures, we called it a day with some food.  Naturally. 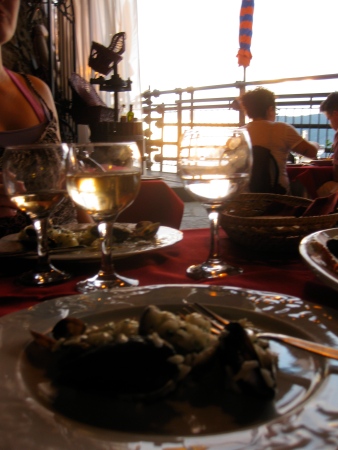 And struck out for another adventure the next morning. 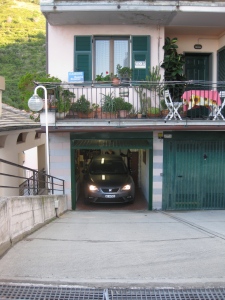