When we bought our house nearly a year ago, we assumed it would be a many year project to slowly but surely update the house.  We started with the kitchen, moved recently into the main living area, and we figured we’d get to the bathrooms later.  Much later.

So the goal of yesterday’s project was to inject the best of the three bathrooms with some love and time so that it would be “done.”  If we stay in the house for ten years, it’ll probably get a new light fixture and a sink, maybe even a different countertop and backsplash.  But for now, it’s done.

The goal within the goal was to get to that point while spending as few dollars as possible.  I decided that the paint color and the chipped mirror were really the worst features of the bathroom, so they are what I tackled. 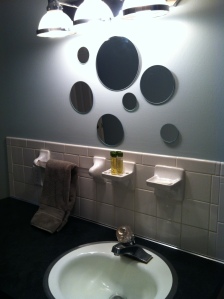 I’m a little bit unsure about the circle mirrors, but I’ll explain why I bought them.  There were three choices I liked at Target–a square mirror with a country-ish frame (which I maybe should have gone with), a set of 6 square mirrors that you’re supposed to hang artfully yet precisely to make a larger grid somewhat like this, and the circles.  I liked the squares for their look of a larger mirror, but I know myself.  No way am I going to be able to hang six mirrors perfectly without measuring anything.  I went with the round mirrors because they allowed me to hang the mirror without measuring.  Hey, at least I know my own limitations, measuring included.

I used a paint chip from Benjamin Moore–Palladiain Blue.  I got the paint from Lowes because it was cheaper ($28 for a gallon) and open when I wanted to buy paint.  Both very important factors.  And I bought the mirrors at Target for $20.  And that’s all, folks.

It amazes me how much this room feels like an actual room now instead of a random dumping ground for towels.  Maybe it’s all in my head, but it really felt different last night.  I think it has to do with the care put into putting it together.  Sigh.  A job well and cheaply done.