Sunday was a beautiful day.  It included sunshine, a nap, and not one but two football game outcomes that I liked (Go Broncos/Seahawks!).  It also included a DVR recording of Masterpiece Classic, which I just got to watch.  I could get used to this Monday off thing.

But let’s get back to yesterday.  Scott and I had a dinner plan all laid out (more on that some other time) and a fridge that was pretty much empty.  Enter the best suggestion of the week.  Scott said, “How about some homemade egg McMuffins?”  Since that’s the one McDonald’s item that I truly love, I was sold.  Something about that English muffin and the eggs and ham and cheese is just wonderful.  Not even the fast food part of it can ruin the tastiness. 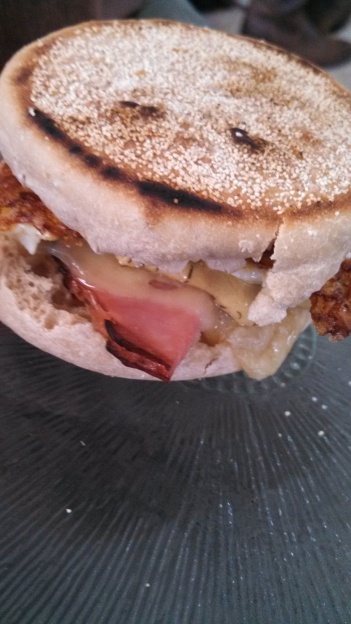 And just when I thought it couldn’t get any better, Scott made it better.  Here’s the quick and dirty “how to”:

I know that anyone can throw together a good egg sandwich.  It isn’t a masterpiece of culinary skill.  But sometimes I forget the simple options.  All we needed to buy was English muffins, and everything else was in almost empty the fridge.  I love things that help us clean out the fridge, especially when they turn into a perfect ham sammich.