I sometimes think that my alarm clock actively chooses not to go off.  That happened for the first time when I was supposed to be at the airport by 4:30 AM for a flight, and again more and more frequently for the past few years. On alarm clock vacation days, I wake up with about 20 minutes to spare before I’m supposed to leave for whatever event (with the exception of the flight that I missed by 3 hours), rush around like a crazy person to fit in a dog walk, breakfast, and a shower before leaving, and still make it to the final destination on time… slightly rumpled and considerably frazzled, but on time.

It’s kind of miraculous that a routine that normally takes an hour could be squished into 20 minutes.  There are a few problems with making that a daily miracle, however.  The first problem is that it becomes really difficult to make yourself wake up at 6:30 when you do hear your alarm, knowing that you got up at 7:39 yesterday and made it to work clean, fed, and on time.  Second, and perhaps more importantly, I’m convinced that my alarm clock is developing emotional issues that are making the problem worse.

It’s one of those typical relationship communication gaps.  My alarm goes off, trying with every shrill beep to wake me up.  I don’t even hear it, causing the alarm to get increasingly frustrated.  Then I get upset that it’s not doing its job, and we’re both sulky messes.  It’s a sad tale that eventually leads to an alarm clock that works 75% of the time and exacts revenge the other 25% of the time.  Nobody likes a passive aggressive alarm clock.

It seems that I’ve been subconsciously trying to reassure my alarm clock by hugging it tightly each morning.  I wake up with the poor thing in a death grip, holding it under the covers like it’s the one ring to rule them all or something and I must protect it from all of the other grasping hands in the immediate vicinity.  You would think that would settle its self-worth issues, but no success yet.  It still sulks silently on my bedside table on a regular basis.

I’m starting to think that it might be time to call in the big dog. 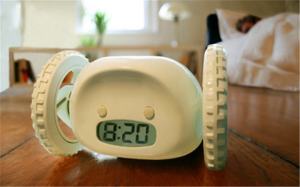 The alarm pictured above is something that my mom offered to buy me a while ago.  I think I responded with a threat (despite the fact that it’s really a genius idea).  The clock goes on your bedside table like any other alarm clock.  The trick is that when you hit snooze in the morning, it jumps off of your table and actively seeks a place to hide from you.  Here’s a video of “Clocky” hiding: here, Clocky!

Can you imagine how frustrating it would be to hear your alarm go off, then have to chase it around your room, climbing under tables and such just to turn it off?  It doesn’t sound like a pleasant way to wake up, although maybe waking up to Clocky at 6:30 would be better than waking up hugging a silent alarm clock at 7:39.  At least you wouldn’t have to worry about any psychological issues that Clocky might develop.  If it’s willing to hide ruthlessly from a sleeping person, it certainly wouldn’t be offended if said sleeping person didn’t hear it.  And maybe my dog would chase it in the mornings, making my job easier by finding the dog instead of finding the alarm.  It might just work.