1.  Peanut and I had some mutually irritated moments this morning, but all’s well that ends well.  He tried to wake me up by walking on my back at 6:30, then again around 7.  After a few exasperated sighs when I didn’t budge, he  decided that starting his morning nap half an hour early wouldn’t be a bad idea.  Such an obliging little guy.  He even put his velvety ears right next to my cheek, so when I finally did wake up, I was blissfully happy.  Love him.

2.  The high temperatures for the rest of the week make eating lunch in my car considerably less appealing.  If I go missing, there’s a good chance that I’m passed out in the library’s back parking lot.  I’ll be baked to “extra crispy” by the time you find me.  Why do I insist on eating out there when it’s this hot?  It’s still more fun to lounge around barefoot in my car for an hour (roasting included) than to freeze politely in the break room.

3.  I made curtains last weekend.  One of the curtain panels has fancy stitching around the edge and would be just fine if tugged around a bit.  The other has a supremely loose hem stitch around its edges and would fall into a heap if you touched it enthusiastically.  Hopefully I can resurrect my grandmother’s sewing machine from 1975 and make them a matching set.  Since I care less every day that the edges don’t match, that’s probably the end of the curtain story, however.

4.  I’ve been spending lots of time on my front porch swing, and I think that somehow gets me closer to officially being Southern.  This was me last night, staying as close as humanly possible to my citronella candle: 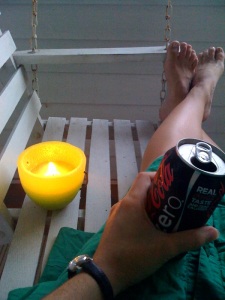 Next on my “being Southern” to do list?  Find the right ratio of tea to sweet.

Check Out My Shop

What do you want to read about?

What have I been reading lately?